Time difference: GMT - 5.
Currency: Jamaican Dollar (although US Dollars are accepted in some places).
Language: English (although a creole language called Jamaican Patois is widely spoken).
Population: Approximately 3 million.
Visa information: Holders of a British passport can stay for 90 days without a visa.

Jamaica has two international airports - Kingston in the south-east of the island and Montego Bay in the north-west.

Visitors to Jamaica can easily get around by taxi or local bus. Driving is on the left and roads might be bumpy with few street signs. A new highway connects Kingston to Ocho Rios in under 1.5 hours, and to Montego Bay in around 2 hours.

Jamaica was originally occupied by the Taino tribes who called it ‘Xamayca’, until Christopher Columbus landed on the island in 1494 and seized it for Spain. The Spanish enslaved many of the Taino people and also introduced African slaves, but for decades the island remained relatively undeveloped with only small-scale agricultural activity.
The indigenous population was wiped out by the mid 1600s, coinciding with the arrival of the British who formally gained possession of Jamaica in 1670. Sugar cane plantations were established and vast numbers of African slaves were sent to the island over the next few centuries.
Slavery was finally abolished in Jamaica in the 1830s, followed by an improvement in the education, health and social services in the latter part of the 19th century.
In 1958 Jamaica formed the Federation of the West Indies along with ten other Caribbean countries, then became independent from Great Britain in 1962.

Our Resorts on Jamaica 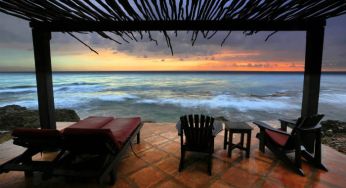