Originally settled by the Carib Indians, who named this fertile island 'Liamuiga' (fertile land),nobody knows how St Kitts, or St Christopher, as it was originally known, got its current name. Although Christopher Colombus passed by on his second voyage, he did not name it, but it is thought that subsequent settlers named it in his honour.

The first European settlers in the 17th century were an Englishman, Thomas Warner and a Frenchman, Pierre Belain d'Esnambuc, who divided the island into two- the French having the north and Basseterre, the English the middle. They teamed up to fight many battles against the Caribs, who were gradually forced out.

As the pace to expand the empire increased, English settlers crossed the narrows to claim Nevis from the Caribs, who had previously named it Oualie. Over the next 200 years there were constant skirmishes between the British and French and it was not until the beginning of the 19th Century that the British finally got the upper hand.

Between the battles, much work went on to establish the sugar cane plantations and both islands soon became prosperous. In common with other islands the slave labour drove the viability of the plantations and following emancipation in 1834 and the increasing production of larger sugar plantations the industry declined and struggled to compete in the world market. Today, tourism and and some sugar can production drive the islands economy.

Our Resorts on St Kitts 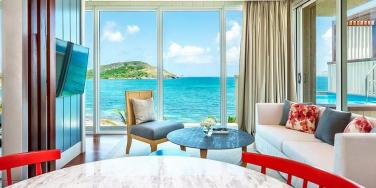