Time difference: GMT-4.
Currency: East Caribbean Dollar (although US Dollars are widely accepted).
Language: English. A creole language is spoken by many islanders.
Population: Approximately 110000 in the whole of St Vincent and the Grenadines.
Visa information: Holders of a British passport can stay for 90 days without a visa.

Access to St Vincent and the Grenadines is usually via Barbados or St Lucia, with onward travel by plane or by boat.
There are regular direct flights to St Lucia from London Gatwick (flight time 8-9 hours) - British Airways flies daily and Virgin Atlantic flies four or five times per week. There are daily flights to Barbados from London Gatwick with British Airways and Virgin Atlantic (flight time about 8.5 hours).
Outbound flights leave the UK in the morning and land in the Caribbean early afternoon, while return flights leave the Caribbean in the evening and land in the UK the following morning.

The onward journey depends on your final destination - some resorts are located on islands with airports such as Mustique, Bequia and Canouan, allowing visitors to arrive after a short flight and transfer by car. Private island resorts don’t have their own airport and instead guests arrive following a flight to a nearby island (St Vincent or Union Island) and a speedboat transfer.

Travel between the islands in the Grenadines is primarily by boat.

The original inhabitants of Saint Vincent and the Grenadines were Amerindians, with Europeans not occupying the islands until the early 1700s. The Caribs resisted colonisation for many years but allowed the settlement of African slaves who escaped to the islands in the 1600s and merged with the native population. The French were the first to establish a colony, before the islands were passed to the British in the 1780s.
The British imported African slaves to work on sugar, coffee, tobacco, cotton and cocoa plantations until they were freed in the 1830s. The economy went into a period of decline, worsened by a series of natural disasters in the early 20th century.
Saint Vincent and the Grenadines became independent from the United Kingdom in 1979 but remains a part of the Commonwealth of Nations.

Our Resorts on The Grenadines 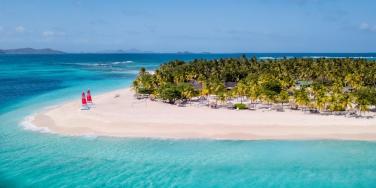